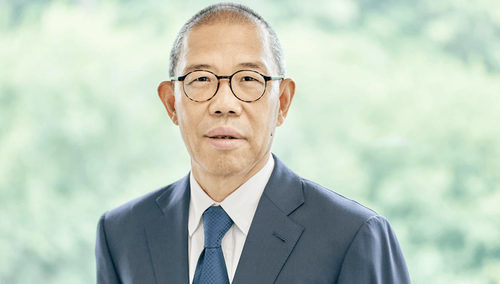 Zhong Shanshan was born in 1954 in Zhejiang, west of Shanghai.

Son of intellectuals, he could have been promised to long studies but the cultural revolution, which hit his parents head-on, decided otherwise. He left school at just 12 and was forced to do odd jobs. He started out as a construction worker, then trained as a journalist and covered companies in Zhejiang province for five years.

During the 1980s, Hainan, an island in the south of the country, became a special economic zone, so Zhong tried his luck as an entrepreneur.

A true jack of all trades, he launched a private newspaper, experimented with shrimp farming and even the sale of curtains. The businessman also works for Wahaha, one of the beverage market leaders at the time. In the early 90s, Zhong Shanshan went so far as to initiate the sale of pills to treat erectile dysfunction.
In 1996, in a country where tap water had to be boiled to be drinkable, the entrepreneur launched Nongfu Shanshui, « the spring water of the peasant ». It finds its source in the Thousand Islands Lake, one of the purest in the country, in Zhejiang, its native province. The company, called Nongfu Spring explodes when the leader announces it will stop marketing purified water and focus on mineral water, which is better for health. The company now draws its water from 10 sources across China.

Nongfu Spring has a leading position in the huge Chinese bottled water market, with a 21% market share in China.

In 2019, net profits increased by 37%. But the company doesn’t just sell water. Zhong Shanshan quickly diversified his company’s activities by becoming a major producer of soft drinks (tea, energy drinks, fruit juices), a niche that generate  him around 40% of his income. Nongfu Spring is one of the three leaders in the beverage market. The group, despite very good results, still suffered from the health crisis which disrupted its logistics chains.
Zhong Shanshan is a follower of targeted strategies. He’s also a jack-of-all-trades: he enjoys being involved in the entire production process, from product design to name selection. The businessman is very conscientious: according to the Chinese press, for example, he spent eight years studying the best way to plant an orange tree to obtain the best fruit juice. The brand became famous in particular thanks to the marketing genius of its founder.

Some of his slogans, «water a little sweet» or «we do not produce water, we are porters of nature» have marked many Chinese.

Zhong Shanshan’s fortune is not built on blue gold alone. In addition to owning 84% of Nongfu Spring, the leader is also on the board and majority shareholder (75%) of Beijing Wantai Biological Pharmacy, a major manufacturer of Covid-19 vaccine and tests. The stock has jumped more than 2,000% since it went public in Shanghai last April.
Nongfu Spring also went public on September 8, 2020. The spectacular IPO raised more than $ 1.1 bn for a company valuation of more than $ 31 bn. For few days, Zhong Shanshan’s fortune thus reached $ 2 bn more than that of Jack Ma. With water, it allowed him to increase his fortune by more than ... 670% from the start of the year 2020. Many financiers expected #1 in China to come from tech, nonetheless Nongfu Spring is showing cheeky growth for a mature player.
Zhong Shanshan was for a few days the second richest person in Asia, behind Indian Mukesh Ambani, and 17th globally. Jack Ma is said to have taken over from his No. 1 position in China.
The businessman is very discreet. Little is known about his private life and his public appearances are very limited. Lu Xiaowei, an older sister of his wife, has a 1.4% stake valued at $ 432 M. The participation of two more of his siblings brings them $ 428 M each. The entrepreneur is said to be married and the father of 3 children.

At 65, Zhong Shanshan is the founder and President of Nongfu Spring, the No. 1 in bottled water in China. The businessman is now one of the top 3 in China with an estimated fortune of $56.4bn.
(source : Forbes 2020).